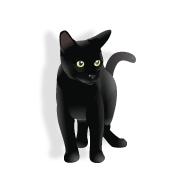 So l am writing my blog post this week as a blizzard swirls around my lighthouse.

lf you have been ‘snowverwhelmed’ this week and you are snowbound and bored, don’t forget there are plenty of boredom busters on my blog to give you ideas for something to do.

lt is very cold at the moment too, isn’t it?

To make things worse, this week, my nephews Bill and Bob have been suffering from a cold and Auntie Alice went to their house to look after them while their mum had to go out.

She was happy to walk round there because the snow made everything look so pretty.

She thought she would tell them some interesting stories to keep them amused. So she took with her a book of hers called ‘Strange but True Cat Stories’.

lt is nice to have stories read to you when you are feeling ill, isn’t it?

Her book is very old, but interesting nonetheless…

l expect you would like to hear about some of the stories too.

Once somebody found a green kitten and couldn’t understand why it was such and unusual colour.

They found that it had wandered away from its mother who was living in an attic with her litter of kittens.

The mother had made a comfortable little ‘nest’ for them all to live in the attic. She was bringing them food regularly but their only source of drinking water was the water tank situated in that loft.

This tank was made from copper and the traces of metal in the water had accumulated in the kittens’ bodies and tinged their fur green.

There are many stories of cats that decide they don’t like the new house their humans move to, and make journeys over many miles to go back to their old neighbourhood, climbing walls and crossing busy roads on the way.

There are some cats that like riding on buses. They even know to go to a bus stop to wait for the bus to come along. They usually like to sit on the same seat and look out of the window. The bus companies are very kind and don’t charge the cats to travel. Actually cats don’t have pockets to keep money in anyway!

Cats have a sense of time, knowing which day of the week to meet their humans carrying the shopping home that contains treats for them.

They have a sense of number and know how many cat treats they are allowed each day – and if they have been short-changed!

Some cats turn to being thieves and specifically target washing lines and shoes left outside on door steps. They like to amass a collection of people’s clothes that they leave in a pile in their own house.

This behaviour comes from their hunting instincts. They are just pursuing clothes instead of mice.

Many years ago, there was a little kitten warming itself by the fire. A hot coal spat out of the fire onto the kitten. lts mother picked the kitten up and ran down the street with it in her mouth.

She knew to go to a nearby horse drinking trough which was full of water. There she dunked the kitten in the water to cool it down and bathe its injury.

Burmese cats have a kink in their tail, and legend has it that princesses used to keep their rings on their cat’s tail while they bathed.

Cats have long been known for their psychic abilities and very acute senses. They know when an earthquake or bad storm is coming and can alert their human companions to this fact. They know when their humans are going to return home unexpectedly and be waiting for them.

lt is said that very clever cats called ‘familiars’ have magical powers and can transport their spirits to another place; usually at night. Witches are thought to have cats that can do this.

You may also like to know the following facts about cats.

Cats can control people. According to a study conducted by the University of Sussex, cats adapt their purrs and meows to get their humans to take action, like for example, get their dinner for them. They get to realize which vocal tones have the desired effect on their human companions.

Cats bump their nose on you to say hello, but they will only do this if they trust you because a nose is a venerable part of the body.

lf they narrow their eyes when they look at you, it shows that they like you.

Cats sweat through their paws when they are hot. ln hot weather they may need extra water to drink. They may also need sun tan lotion put on their ears – especially if they are a light colour. You can ask your vet about this.

The oldest cat, a tortoiseshell called Poppy died at the age of 24 on 11th June 2014; she lived in Bournemouth.

Do you know any weird or wonderful cat stories?

Bill: l don’t know. Which cats like to go bowling! 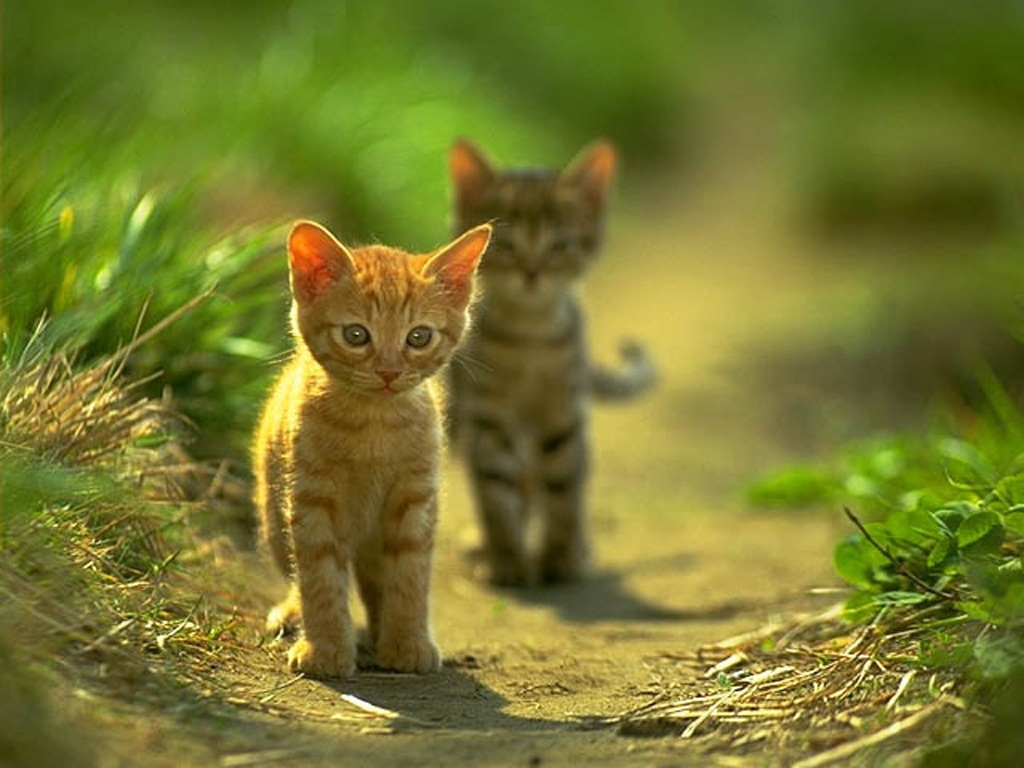 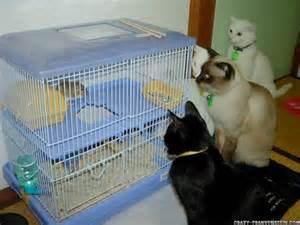 But make sure that they behave themselves 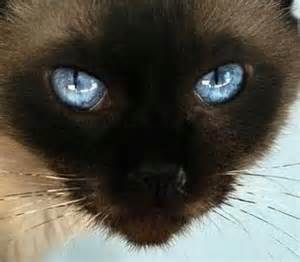 Siamese cats have blue eyes – most cats have yellow or green 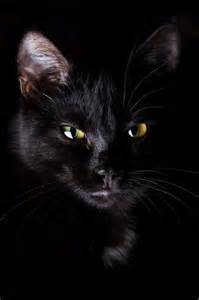 Black cats bring good luck when they cross your path

Bill and Bob have been helping me with my blog and have made up another one of their quizzes for you this week. As you know they love cartoons, so they decided to make their quiz all about cats from some of their favourite programmes and books. 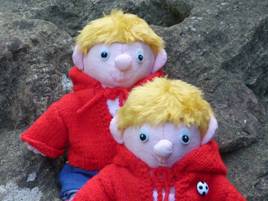 It is another crossword. Do you know these famous cats from television? 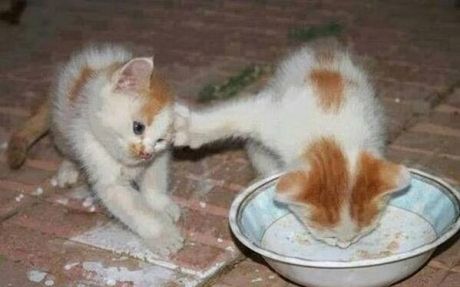 As I have told you before, one of the things that Auntie Alice does when she is not knitting or looking after a house full of visiting children, is volunteering her time at the Rocky Bay Wildlife Hospital.

Next to the hospital is an animal rescue centre, and it is from here Auntie Alice gets the dogs and cats that are lucky enough to come and live with her.

They have all been out in her garden playing in the snow this week.

Some of the animals aren’t babies, they are full grown and Auntie Alice is happy to take home these animals because sometimes puppies and kittens can be very destructive.

After a while his name was shortened to Biscuit. 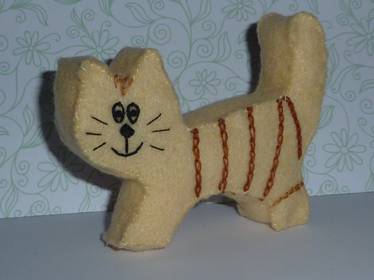 Auntie Alice has made a little Biscuit for you to have too, if you would like one.

I must say it really is a good likeness! 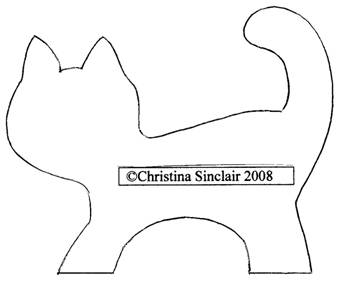 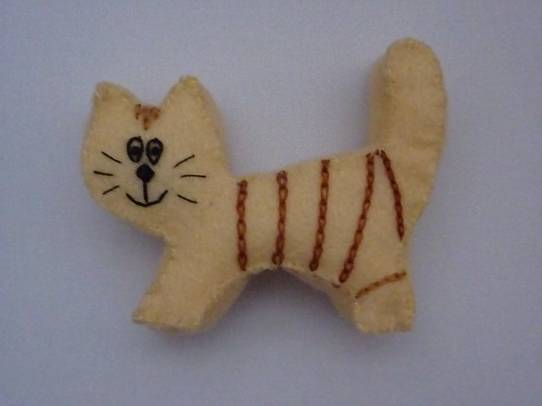 *It is really important to sew the second side on to match the first – it may help to put a pin at the tip of the ears and sides of the neck as you line up the second side so that it doesn’t slip as you start sewing – if things go wrong, you can undo your sewing and start again.

*This project is not for a sewing newbie – if you think that it will be too difficult for you, you could make a cat brooch instead. Just sew the two sides together with a tiny amount of stuffing between and then sew a brooch pin on the back. Don’t forget to embroider on all the features before you construct the brooch.

*If you would prefer to have a black or white cat then of course this is possible by just choosing different coloured felt to make you cat out of. Biscuit is very friendly; he may well love to have some friends. 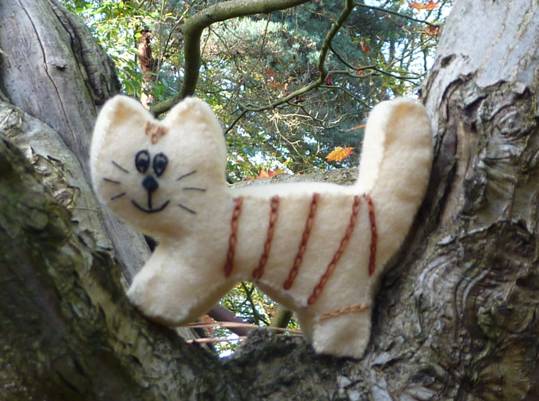 lf you have got wild animals and birds in your garden, please try to give them some food and water as this bad weather continues if you can.

They will be very grateful. 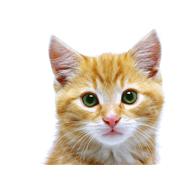 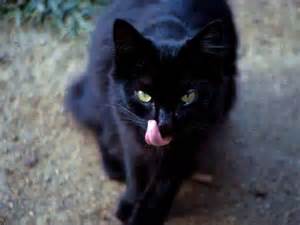 HOW TO MAKE A CATNlP MOUSE

This is pattern for a big, soft mouse for your cat to cuddle. 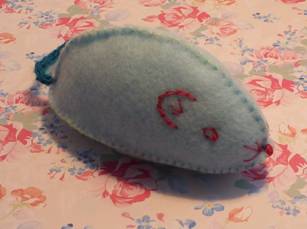 If you wrap it up to give as a present for Christmas, don’t put it under the tree before Christmas Day; your cat won’t wait to open this present because he/she will smell it and open it before time!

Auntie Alice is always making toy mice because Biscuit is always losing them in the garden. Luckily, however, Auntie Alice does grow catnip in her flower beds so she always has a ready supply to use.

Make sure your stitches are neat and close together and use strong thread – this mouse will need to withstand a lot of rough handling (or pawing! 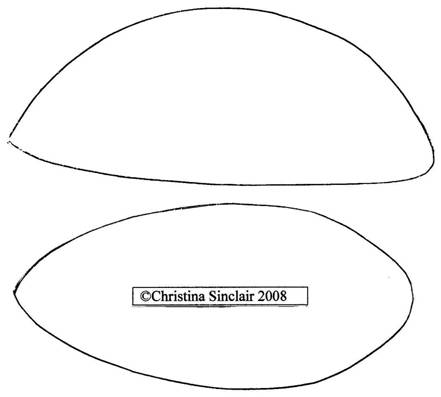 Don’t sew on sequins or beads or anything that your cat could easily swallow. 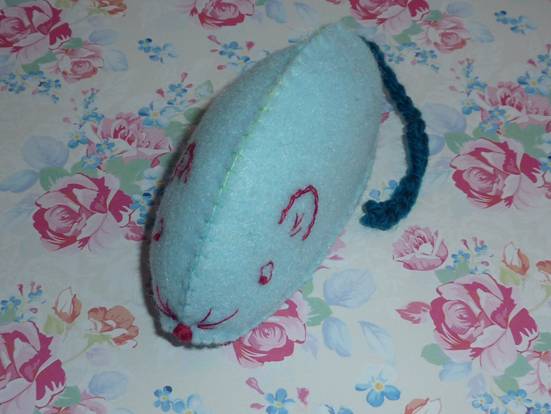 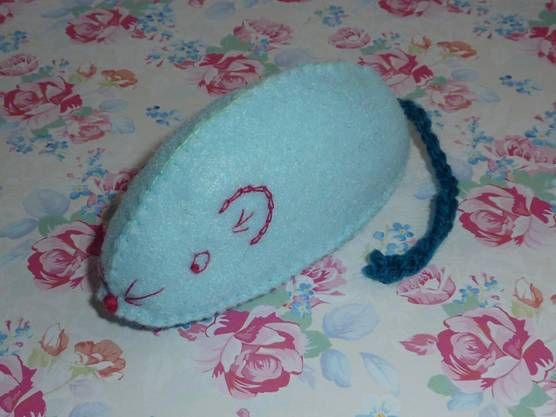 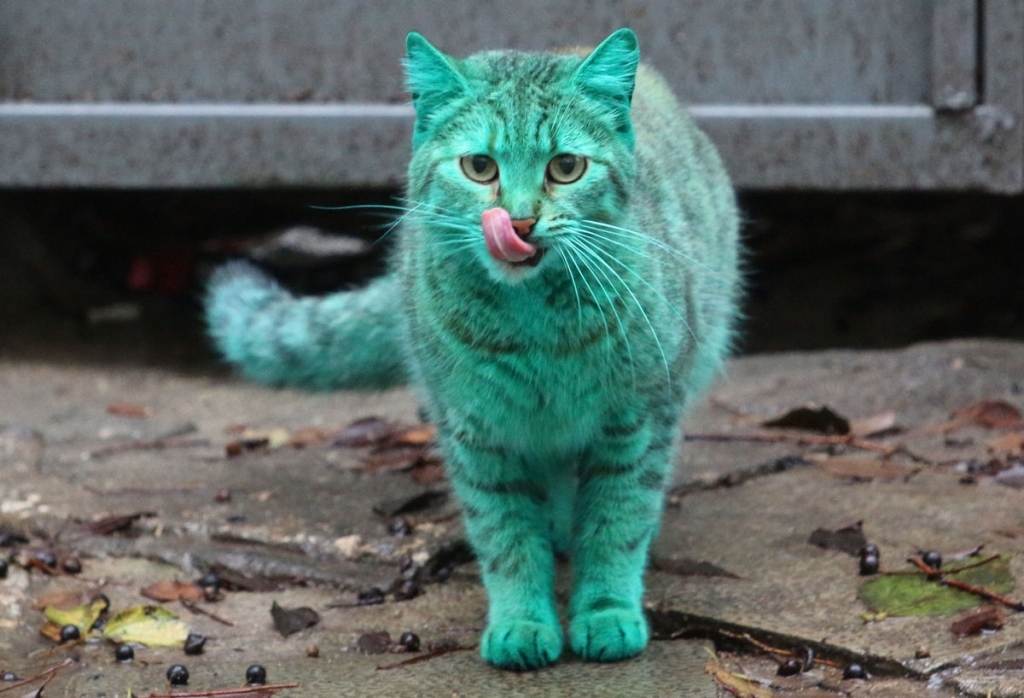 but it turned out that it has been sleeping in some paint and coloured itself! 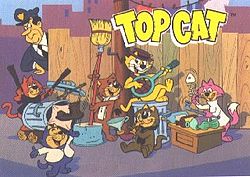 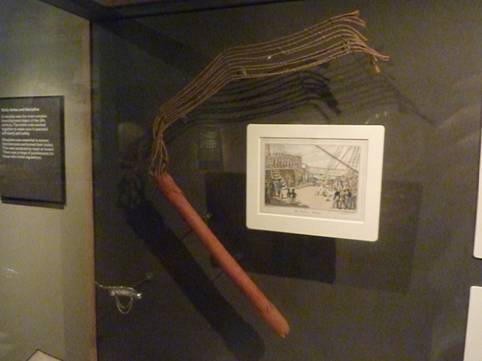 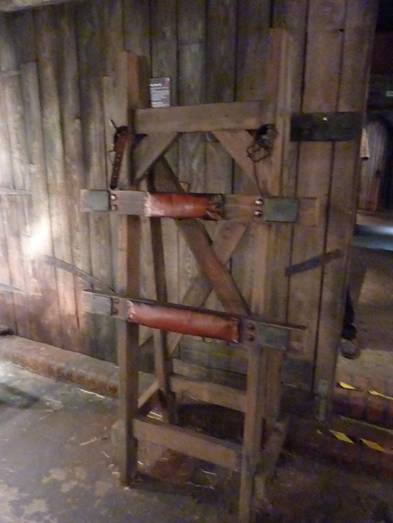 The men who were being whipped were tied up 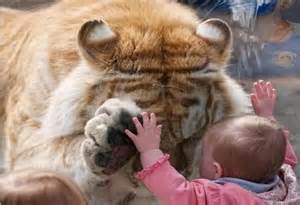 Give me a high five! 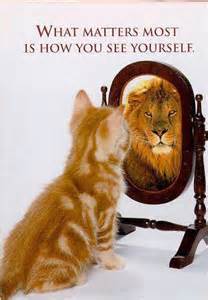 And if you love cats, you must see my cat picture collection at:-