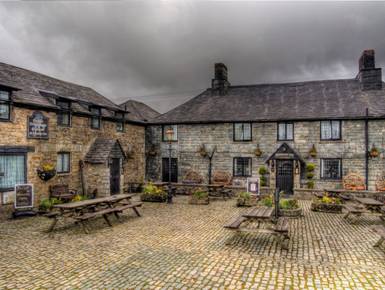 On the wall of the Rocky Bay Harbour is the Rusty Anchor lnn.

The Rusty Anchor was built to give hospitality to sailors and fishermen travelling up and down this coast and still retains a lot of its original charm.  The outside has a more modern façade but the insides are really old.

An inn is an old-fashioned word for hotel, and in the past, travellers would look for inns along the road to find a sustaining meal and a bed for the night when they went on long journeys.  There would be room to stable their horses for the night just like hotels have car parks today.

The horses would be fed and watered too.

One of the most famous coaching inns in my part of the country is Jamaica lnn.

Have you heard of it?

The name of Jamaica probably comes from the fact that local important landowners called the Trelawney family had two family members who served as Governors of Jamaica in the 1700s.

Jamaica lnn has a long and interesting history.

Situated right in the middle of Bodmin Moor, a bleak place often beset with wild and windy weather, many travellers were happy to see the view of an inn coming into sight at the end of a long day.

lt was built in 1750, in replacement of another establishment built in 1547, to accommodate travellers using the turnpike between the towns of Launceston and Bodmin.

A turnpike was a highway that you had to pay a fee to travel along, and the Jamaica lnn was situated just about half way between the two towns.

The inn was a staging post for coaches, and here a fresh supply of horses could be found.

But because this hostelry was positioned in such a remote position, it was often frequented by villains.

ln modern times, a small village with a church stands nearby.  lt is called Bolventor.

Often safe harbour for highwaymen and cut-throats, the Jamaica lnn was also the haunt of pirates and smugglers who brought contraband from France and lreland to the Cornish coast.  lt was transported by packhorse to Jamaica lnn where it could be hidden and sold on.

The booty was also often stolen from ships.  The smugglers would lure the ships in towards rocks by lights set out on the shore.  The sailors on the ships thought that they were steering towards a safe harbour.  ln reality, they were heading towards a secluded cove where they would meet their doom.

Once the ships hit the rocks that littered that coastline, they floundered and sank.

The smugglers would even go as far as drowning the people from the ships as they swam ashore just to get rid of them and take their goods.  There was a lot of money to be made.

The contraband could be lace, tea, silks, tobacco and brandy.  These kinds of goods were supposed to be taxed upon entry to the country.  The smugglers didn’t pay the tax, and if the goods were stolen, made a hundred per cent profit on them.

The smugglers operated quite freely along the north Cornish coast partly because it was not serviced too well by officers of the law and partly because court judges were fairly lenient with the smugglers, often receiving some of the goods from the trade to keep for themselves.

The inn’s sinister history was drawn upon in a novel written by Daphne du Maurier in 1936.  ln her story, the inn has no guests though.

The dark story of the book has been made into films and television programmes.

Visitors still stay at this inn to hear stories of smugglers past and ghost sightings.

They may be lucky enough, or unlucky enough, depending on your point of view, to see a ghost themselves.  Many people have been murdered on the moor and their ghosts still frequent the buildings, so local legend has it.

They do say rooms 4 and 5 are especially active – and furthermore the hooves of ghost horses can even sometimes be heard on cobbles in the courtyard – cobbles that are no longer there.

The inn retains many 18th century features inside, like sloping floors and low beams and it also has a museum of smuggling and gift shop.

Bob:  Jamaica mistake when you bought those curtains or what! 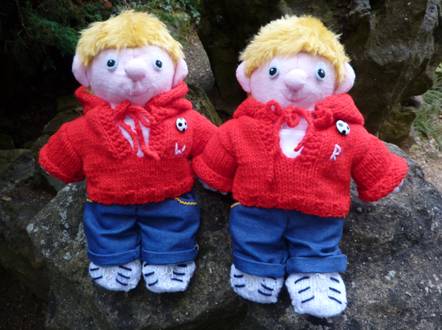 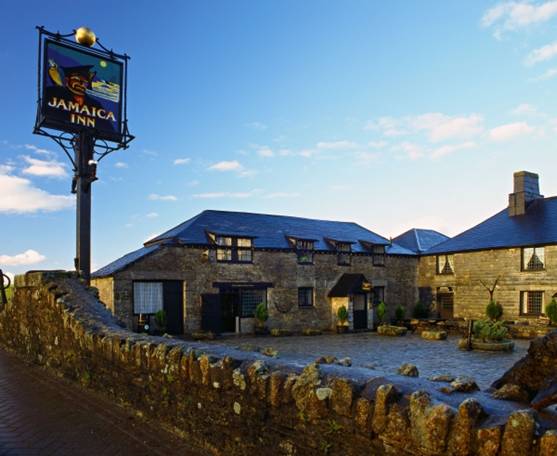 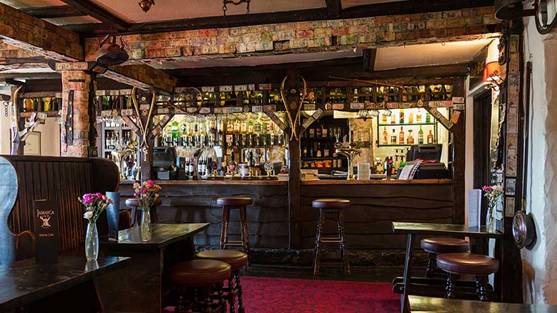 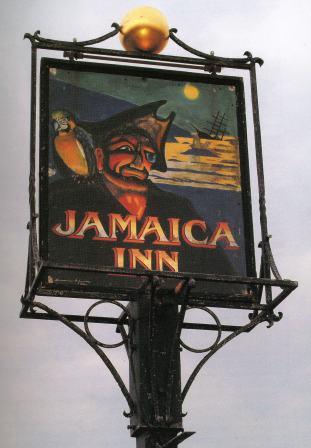 This week, Miss Pringle was explaining to her class how to use a thesaurus.

A thesaurus is a book with lists of words that have similar meanings.

But first she explained to them the difference between a dictionary and a thesaurus.

When you use a dictionary it tells you four things.

How to spell a word

How to pronounce a word

What the word means

What part of speech it is (noun, verb, etc.) and so how to fit it into a sentence properly

They each have their advantages.

If you want to know how to spell a word and you have to guess how to spell it first in order to find it, a book is better because you can scan a page knowing that you are in roughly the right part of the dictionary according to its alphabetical listings.

A search engine often still finds a word for you on the Internet when you have slightly misspelled it.

A little computer dictionary is much easier to carry around in your school bag than a big book, but it will need a battery every so often which a book never does.

Dictionaries give you information you need about words that are new to you.

They are a good learning tool. 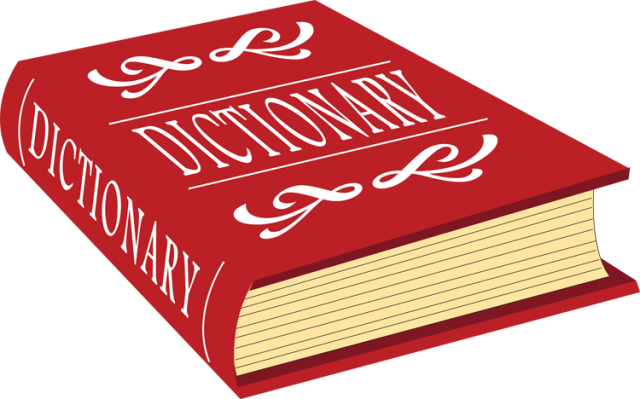 Thesauruses are to be used in a different way.

They are a good tool to jog your memory.

When you write, it is bad style to keep repeating the same word.  You need to vary your language to make your writing more interesting and appealing.

Luckily, the English language has a lot of words to choose from – about a million.

Don’t worry; you will not have to learn all these word to be good at English.

Even an English teacher does not have to learn all these words.

That is because a lot of them are technical words and specialist words only really used by doctors and computer designers and engineers and people like that.

So if you want to use a word that has the same meaning as another one and you can’t think of one, a thesaurus can help you.

But when you find a word in a thesaurus, you have to know how to use it already otherwise you could use it wrongly and make a silly mistake and a mess of your writing.

Some words can mean the same as another but not fit in a sentence in the same way.

For example ‘brave’ and ‘hardy’ have a similar meaning.

You could call a soldier brave and hardy but you wouldn’t refer to a plant as being brave although it could be hardy.

The way you know how to use words properly is to read lots of literature written by good writers.

Then you will learn how to use language correctly – and also naturally.

If you read the kind of books you really like to read, this is not a chore.

You need to be good at English to be good in all your other subjects too.

Knowing how to use books that will help you is a good lesson to learn.

You should always do your homework with a dictionary at your side and maybe a thesaurus too.

Whenever you come across a word you don’t know, you must not ignore it but check its meaning.

Your local library will have loads of books for you to read – if you want to borrow some don’t forget to take a big bag with you.

You can keep a note of all the new words that you learn in your own mini-dictionary to make sure you don’t forget them. 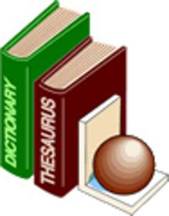 This massive bag will be very useful to your doll.

She can pack loads of stuff away and then be good to go – the bag could be used for clothes, books or shopping.

BOX BAG BASE (KNIT ONE) 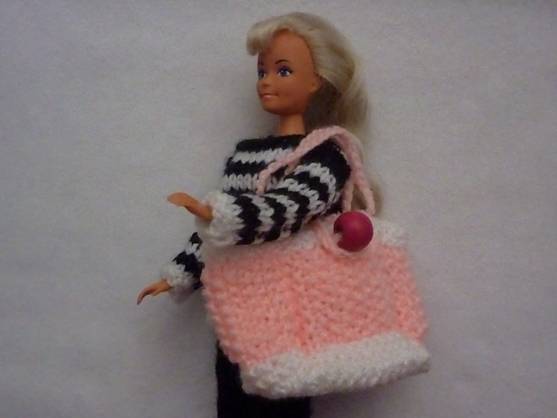 Can you see the names of these very famous writers?

Here is another finger puppet for your collection. 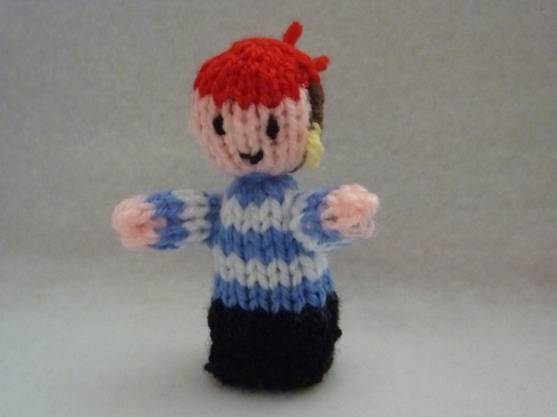 PUPPET BACK (KNIT ONE) 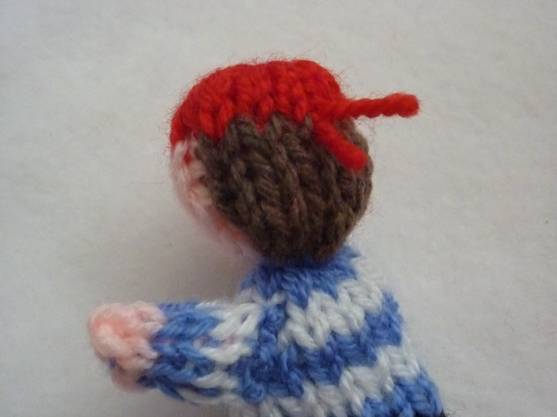 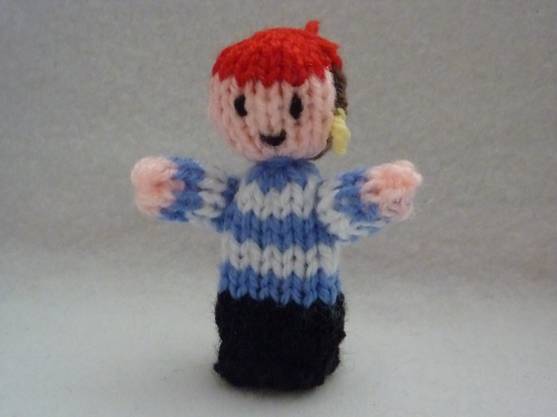 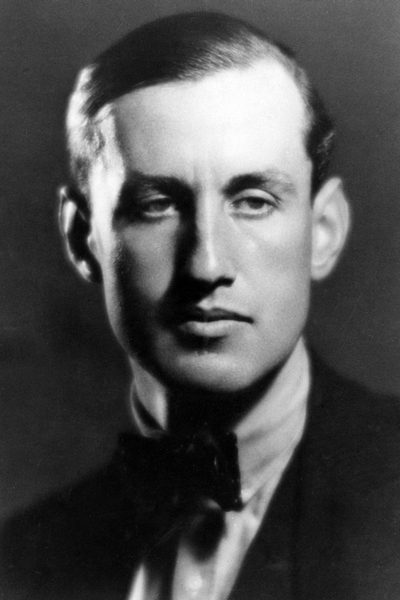