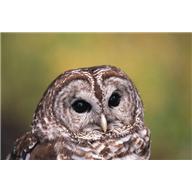 A lot of people like owls because they have sweet faces.

Auntie Alice thinks she is very lucky because she has some owls living in the woods behind her garden and she can hear them at night.

Owls live in hollow trees or in the roofs of barns or in nest boxes that people have put up for them.

They have about 1-6 babies every year; these babies are called chicks.

A lot of people think that owls say twit twoo but not all of them do. Tawny owls do, but barn owls just screech.

ln fact, the female Tawny owls say twit and the male Tawny owls call back with twoo and this happens so quickly that it sounds like just one call. They call out to each other so that they know where their mate is in the dark.

Owls have large eyes designed to see well in the darkness and they have very good hearing. They have a way of turning their heads around a very long way which looks a bit unnatural, but it enables them to survey the landscape around them when they are perched high up in a tree or on a roof.

Owl’s feathers lack oil which makes them quiet when they fly. Then they can fly silently through the night and swoop down on their prey without being heard. This means though, that when it is raining they do tend to get a bit waterlogged.

Commonly in folklore, owls were always thought of as wise, but in actual fact they are not the cleverest of birds.

Maybe people have always thought them wise because when they look down at you they have the kind of face people want to tell their problems to – in the hope of receiving wise counsel (advice). This is certainly what happens in fairy tales.

Or maybe it is because owls spend such a lot of their time sitting still (rather than flitting about like most other birds), that people assume that they must spend their time thinking a lot – and contemplating the universe!

Occasionally, people think that they see an owl during the daytime sitting in some high up place. The owl isn’t moving and people get worried – but some of these owls are actually made out of wood.

These wooden owls are sometimes put on roofs, poles and electricity stations to scare other birds away.

l’m not sure that it works though, because l have seen one of these wooden owls surrounded by pigeons!

Have you ever seen an owl?

Bill: What happened when the owl lost his voice?

Bob: l don’t know. What happened when the owl lost his voice?

Bill: He didn’t give a hoot! 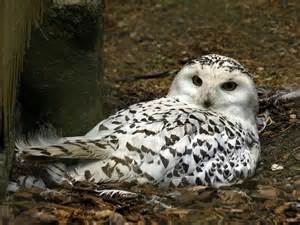 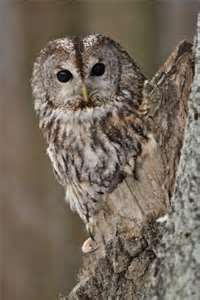 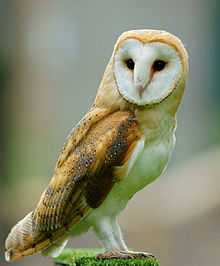 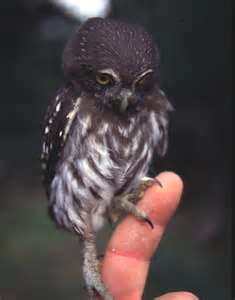 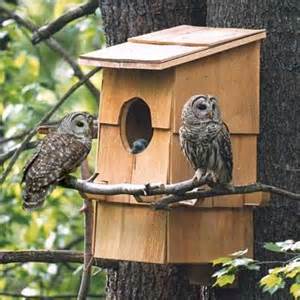 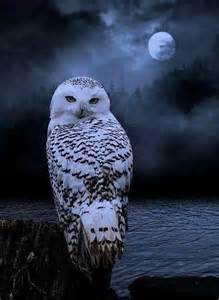 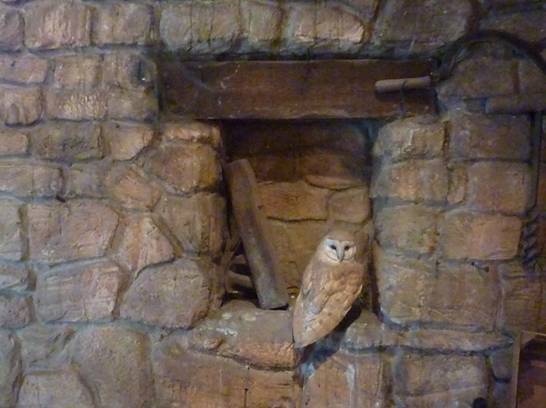 Owls need places like barns to build their nests 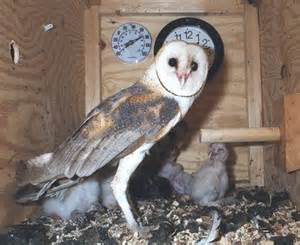 They can nest in man-made boxes 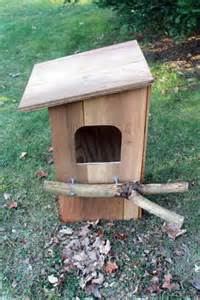 Owls need larger front doors than most other birds 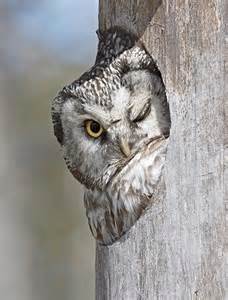 I must tell you a funny story about what happened to Auntie Alice last summer.

It was a very hot night and she had left the bedroom window open to let in some air.

In the middle of the night a strange noise woke her up.

She looked down to the bottom of the bed and saw two large eyes staring at her.

An owl had flown in through the open window and was perching on the bed post.

Maybe it was looking for a bigger roost and decided that Auntie Alice’s cottage looked a more comfortable place to live than an old, hollow tree.

Luckily, as she got out of bed it flew away.

I don’t know who was more startled Auntie Alice or the owl – but it hasn’t come back since! 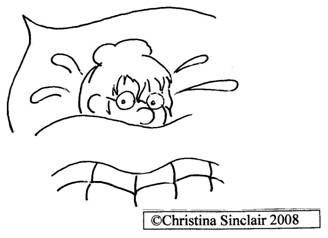 Complete these similes with names of animals:- 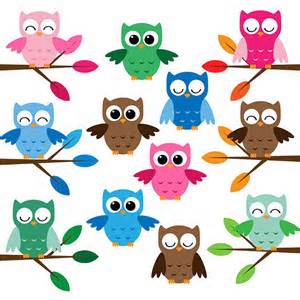 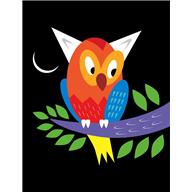 HOW TO MAKE BOBBLE BlRDS

The owl is tweedy white and grey yarn and white yarn. 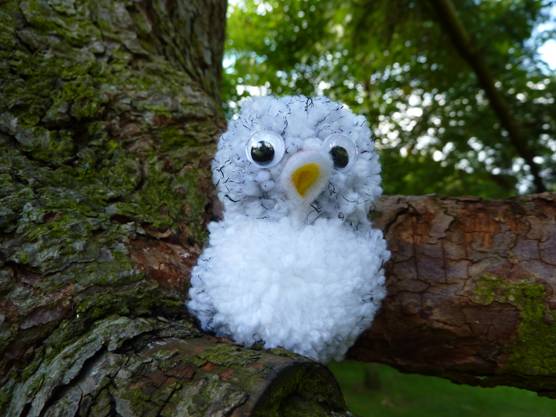 The robin is brown yarn and red yarn. 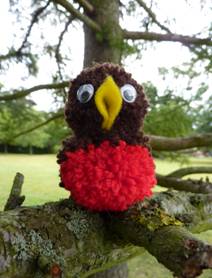 The penguin is black yarn and white yarn. 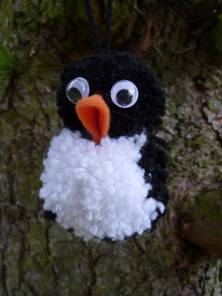 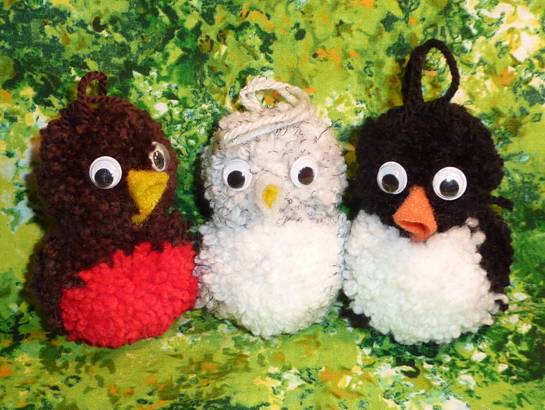 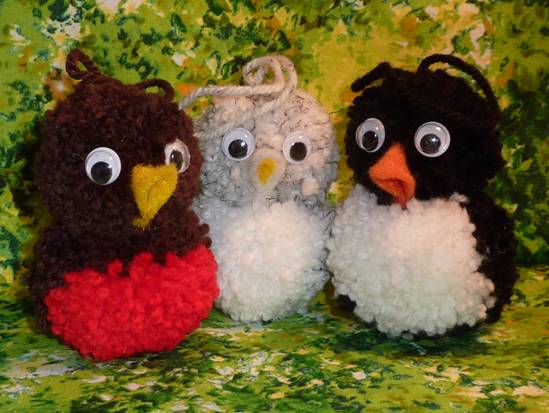 These are not suitable toys for very young children; however they would look very good sitting/hanging up in your Christmas tree.

If you make a large group of penguins to go in your tree, it would be called a ‘colony’.

A collective noun for owls is ‘parliament’ and for robins it would be a ’round’ of robins. 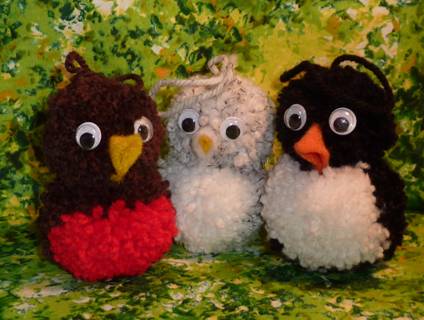 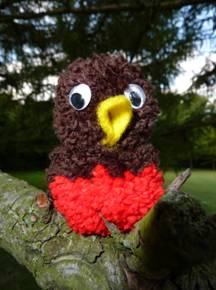 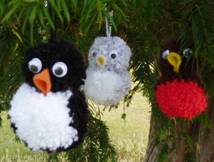 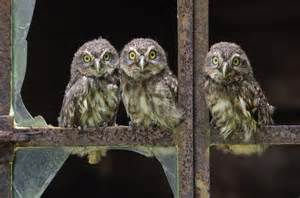