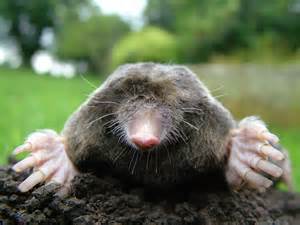 The other day, Bill and Bob saw a tiny creature in their garden that they had never seen before. lt was a mole scrabbling about in the long grass.

Some people say that it is impossible to see moles above ground – only the mole hills that they leave behind; hated by gardeners everywhere. But this is obviously not true.

Moles are, however, very timid creatures and rarely seen.

Bill and Bob decided to find out more about moles and were astounded by what they found, because they really are amazing creatures.

Moles are adapted for living underground most of their lives and so their bodies have very special features. They are a very good example of how animals can adapt themselves to their surroundings.

Moles have tiny eyes and ears because when you live almost all of your life in the dark you don’t need good eyesight. Touch and smell are more important senses.

A mole’s back legs are quite small, but their front ones are very strong because they use them for digging tunnels through the earth. Their paws are big and flat and very powerful, they even have an extra thumb to help with all that digging. Their claws can be enormous. They are able to dig many metres of tunnels in a day.

These tunnels are created as moles go in search of food and sometimes the tunnels have chambers attached to them which act as larders where moles store food, or nests which are filled with dry grass. Mostly, moles eat earthworms but they also eat snakes, lizards, slugs and nuts.

Underground there aren’t any predators, and there is also protection from cold weather. They find it a convenient place to live.

Moles have special blood which can recycle oxygen breathed in above ground, this is important when you live underground; there is little air.

Mole hills are piles of fine earth excavated from tunnels and can be shovelled up and put on the compost heap or dispersed over the grass with a rake.

The most famous mole in fiction was probably Mole from Wind in the Willows; a sweet-tempered, home-loving animal who made friends with a water rat.

Bill and Bob don’t think they will see the mole again.

Bob: What is grey, furry and can’t see?

Bob: A mole with his eyes shut!

A mole’s front legs are bigger than its back legs 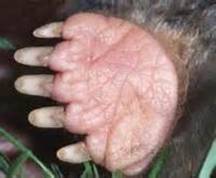 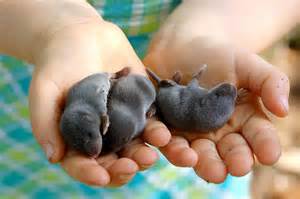 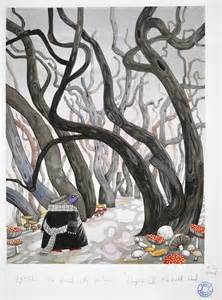 Moles might be fascinating to scientists because they show us how animals can adapt themselves so well to living in their environment, but gardeners aren’t so keen on them.

Some people think that when you live in the countryside you will get wildlife come into your garden and that is just how it is, you have to tolerate the problems it might bring; others go to extraordinary lengths to try and get rid of moles from their lawn – like playing music in their tunnels.

Mrs Miggins, Captain Jack’s landlady, doesn’t have trouble with moles in her garden.

This is because she lives in a stone cottage overlooking the harbour which has a small courtyard garden at the back and this is paved over.

If moles ever tried to come up under the paving, they would probably just bonk their heads – so they don’t even try!

The only place Mrs Miggins has to grow any flowers or vegetables is in pots or raised beds, and these beds are made out of bricks and filled with soil.

Captain Jack has taken over the biggest and sunniest of these beds to make a pumpkin patch. He puts some chopped up rhubarb in the soil to stop bugs eating the roots of his vegetables and then spends a lot of time watering the beds through the summer.

Every year at the Rocky Bay Autumn Show, Captain Jack loves to enter the ‘Biggest Vegetable Competition’ and his entry is always the biggest pumpkin he has been able to grow that summer.

To be honest with you, Mrs Miggins wasn’t too keen on her garden being taken over by these monster vegetables at first, but when Captain Jack said she could have all the vegetables he grew to cook for dinner she agreed to his plan. 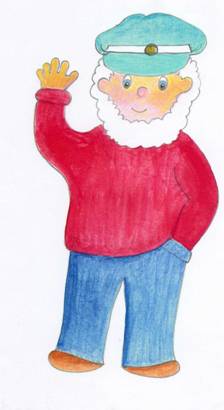 The table at the show with all the monster vegetables on is always a popular attraction.

There are onions, leeks and marrows as well as pumpkins displayed on it. The table heaves with the weight so much the legs have now gone wobbly!

Halloween follows a while after the show, so there are plenty of children around Rocky Bay who have massive pumpkin heads to put on their doorsteps.

But actually, giant vegetables are not the most popular exhibit in the show.

The table that people love to visit the most is in the ‘Funniest Vegetable Competition’.

This table has the weirdest display of misshapen vegetables you have ever seen.

They are mostly roots like carrots or parsnips that have grown into shapes that look like people or strange faces.

Bill and Bob entered the children’s competition last year with an entry called ‘The Elephant Man’. It was a Cox apple and came in second to a carrot that looked like a pair of scarecrow’s trousers.

They found the apple in Auntie Alice’s garden, and she said they could have it for the competition.

First, they drew on some eyes but then they thought that their man looked as though he might be crying so they drew a smiley face on him as well.

They are obviously tears of joy because of winning a prize!

So… if you want to win a prize at the Rocky Bay Autumn Show and your vegetables don’t turn out to be big ones, you can only hope they turn out to be funny ones. 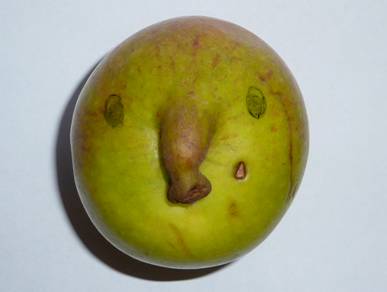 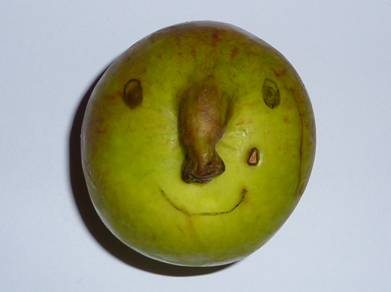 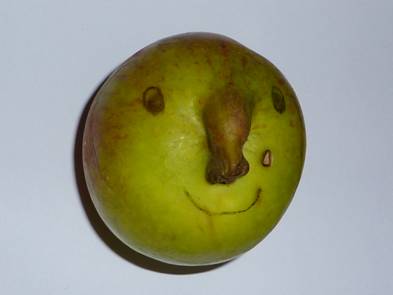 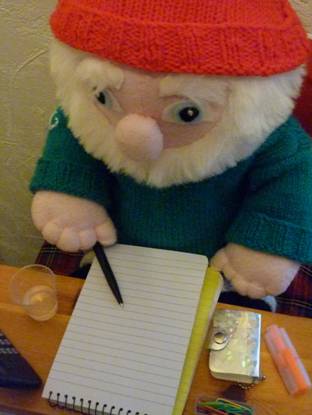 On Blog Posts 37 and 147, l told you how you can grow new plants from parts broken or cut off others (cuttings).

Christmas and Easter cacti can be grown in this way too.

The Christmas cactus prefers a soil that is one part coarse sand to three parts compost. Make sure your pot has proper drainage.

Let it rest after blooming by watering less frequently.

When you are expecting flowers to start appearing, a weak fertilizer can be applied every two to three weeks.

The most important thing to remember with these plants is that they don’t like long days. So don’t keep them in a living room where you will be turning on the lights in the evening around the time when you are expecting them to flower.

lf you keep them in a room with a street light outside, remember to draw the curtains at dusk.

These cacti have very pretty-coloured flowers so they are worth growing. 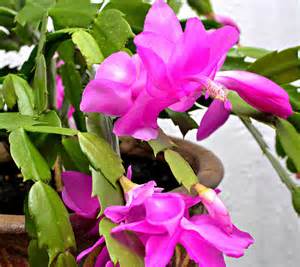 HOW TO MAKE AN OUTSlDE WORMERY

A wormery is an enclosed bin which uses worms to help break down vegetable matter. It is a very environmentally friendly way of dealing with refuse.

Bill and Bob have put one in their garden. It is amazing that they can find room for all their projects sometimes, their garden isn’t that big!

Their mum said that they would have to deal with it themselves because there was no way she was going to start handling worms!

If you would like a wormery, there are a few things you should know.

The worms have to be of a special type – they have different names – Brandlingworms or Tigerworms or Redworms (you can buy them). 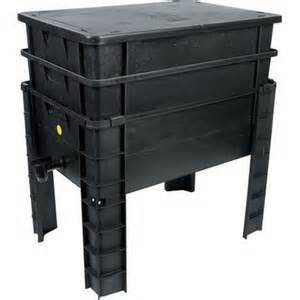 You can buy a wormery or convert a compost bin or dustbin into one.

If you purchase a dog poo wormery, do not use the compost on your vegetable patch or where children play – maybe putting it in the shrubbery in the front garden would be a good idea.