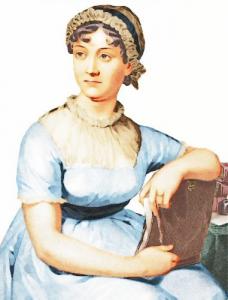 As you go through your school career, you are heading for some big exams that you will take just before leaving school.

When you study English, part of the course will be reading books.

You will probably study Shakespeare at some time.  There are other writers whose work you will read and the same ones keep coming up on the syllabus again and again.

One of those writers is Jane Austen.

Her books are not only well-written, but are very interesting.

The stories are interesting and the insight they give us into life at the time Jane Austen lived is interesting too.

l thought you would like to hear the story of her life.

When you become a writer, you often draw upon things that you have experienced in your own life to give you ideas.

When you study books at school, it is a good idea to find out about the life of the writer too.  This gives you a deeper understanding of ‘where they were coming from’ when they wrote their novel or play.

lt will really help you to understand a writer’s work more.

Jane Austen was born in the village of Steventon in Hampshire.

Her father came from a poor family and became a clergy man; that means he worked for the church.  He was a rector who had been orphaned as a child and, along with his sister, had to be taken in by relatives.

Jane was the seventh of eight children and lived in a close and happy family.

Jane had a good education.  lt would have included: needlework, music and dancing.  Jane loved to dance.

Jane taught herself a lot from books too.  Her father had a large library of books.

She loved writing and began to write from a young age.  Her father encouraged her writing and bought her expensive paper to write and draw on.

Her family and friends used to stage plays in the rectory barn.  Most of the plays were comedies which is what probably gave Jane an introduction to and a taste for satire (comedy that mocks people) and biting wit at an early age.

Jane wrote three short plays while she was only a teenager.

ln 1801, the family moved to Bath, and Jane was not happy about going.  She did not like town life as much as village life.  ln fact, she was so unhappy she even stopped writing.

But ironically, her new circumstances were to improve her capacity to write good stories because it was mixing with this new society that gave her lots of ideas for characters and situations.

ln those days, it was uncommon for women to own property or follow a career and would be at the mercy of men to provide a roof over their head.

This was an important and recurring theme of Jane’s novels.

So Jane, along with her mother and sister Cassandra, moved several times.  For four years they moved from house to house depending on relatives to provide them with a home.

They finally settled in Chawton, which was near to Steventon, in 1809. They lived in a cottage provided by Jane’s brother, Edward, from his estate.

Life was much quieter there than in Bath.

Jane’s brother Henry helped her negotiate with a publisher, Thomas Egerton, and Jane’s first novel called Sense and Sensibility was published in 1811.  The sales gave her some financial independence and relief as she and her mother and sister had been living off the charity of her brother until then.

The story is about two sisters.  The younger one falls head over heels in love but the relationship does not go well.  The elder sister tries to be more sensible about all situations and then eventually falls in love herself.

The novel Pride and Prejudice followed and was met with critical acclaim.  That means people liked it and gave it good reviews.

The story is about a family with five daughters.  The mother is desperate to find husbands for them all.  Some of her plans go well and some don’t.

The second daughter, Elizabeth, meets a handsome man called Mr Darcy.  She does not like his manner or attitude but Mr Darcy likes Elizabeth.

The book tells us about the social life of people of the time.  The families attend a lot of dances and social functions.  They visit neighbours and meet people and gossip.

Emma was dedicated to the prince regent who was a fan of Jane’s work.  The dedication was requested by the royal librarian, James Stanier.

Jane was not a fan of the prince regent’s disreputable behaviour.  This member of the royal family loved partying and drinking too much alcohol and gambling and wasting money.

But he was royalty; and Jane did not feel that she could refuse.

Emma did very well for Jane.

ln 1816, Jane began to suffer from ill health and went to Winchester to try and get treatment.  But she did not get better.

A lot of her characters had a driving ambition to get married, but Jane had never married.

She had had three romantic attachments in her life.

The first was a handsome lrish law student called Thomas Lefroy whom she met in 1795.  He returned to lreland a year later.

Then in 1801, she fell in love with Samuel Blackall, a man she met whilst on holiday in Devon.  He tragically died soon afterwards.

The third relationship was with a large, young man called Harris Bigg-Wither.  He was not handsome and had few social graces.

She accepted his marriage proposal in 1802 because he had money and property and she thought he could offer her security, but changed her mind shortly afterwards.

She had earned about £650 from her books.

Two more of her novels were published after her death.

They were called Persuasion and Northanger Abbey.  There was another book called Sanditon that was left unfinished.  A few years ago, Sanditon was made into a television drama – with an end added.  Would Jane have approved of the ending written for it?

Because of her connections with the church, Jane was buried in Winchester Cathedral.

All her books were published anonymously.  But Jane Austen is very famous today.  She has a huge following throughout the world and tourists flock to see the houses in which she lived in Bath and Chawton.

People love romantic stories with happy endings and many films and television series have been made about the stories she wrote.

Jane Austen is a modern-day superstar.

Bill:  Why should you not try to use a broken pencil? 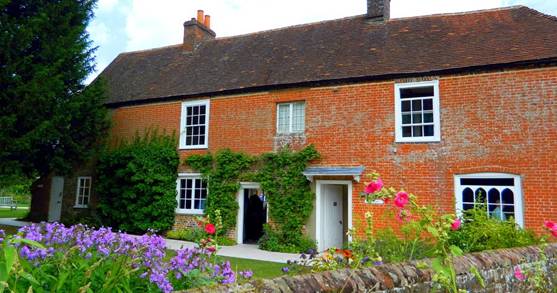 is open to the public 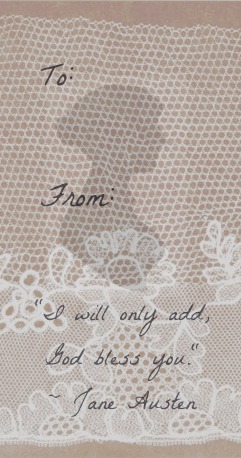 She doesn’t throw them away.

Sometimes she puts onions skins and vegetable peelings into them when she is cooking in the kitchen and then hurls the whole box onto her enormous compost heap.  This way she does not have a compost bucket with a wet, slimy, smelly bottom to it sitting in the kitchen.

You can put paper, card and straw on compost heaps.

Sometimes she puts scrap paper into her food boxes and puts them in the recycling bin for the Rocky Bay Council to take away.

Sometimes she doesn’t use them at all because the children get hold of them first to use for making things.

This week they made some bookmarks that looked like tall buildings.

If you want to make some bookmarks like this, it is a good idea to draw your pictures and colour them in before you cut them out.

Just don’t leave them inside your library books when you take them back to the library!

Draw around the end of a ruler to make a shape to work on.

Make the rectangle into some sort of tall building.

It could be a windmill or block of flats or multi-storey car park or of course a lighthouse.

The bookmark in the picture is a fairy-tale tower.

Once you have drawn your picture you can colour it in. 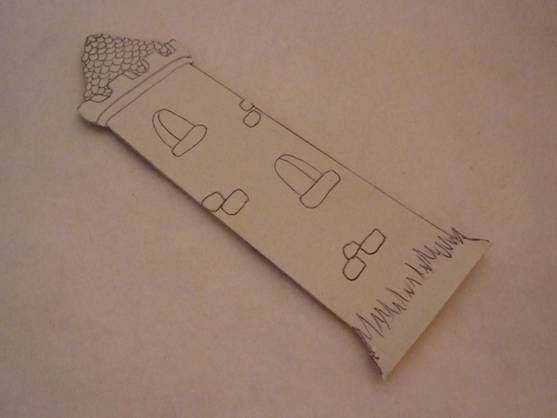 Do you know the surnames of these children’s authors? 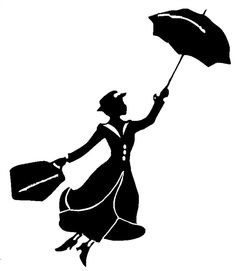 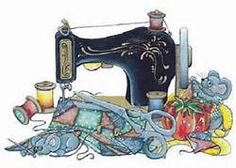 This pretty pin box is worked in two shades of blue and a white metallic yarn sewn into tiny crosses that gives it sparkle.

Make sure that all your crosses lie in the same direction to ensure a neat appearance to your work.

You will need the following panels:- 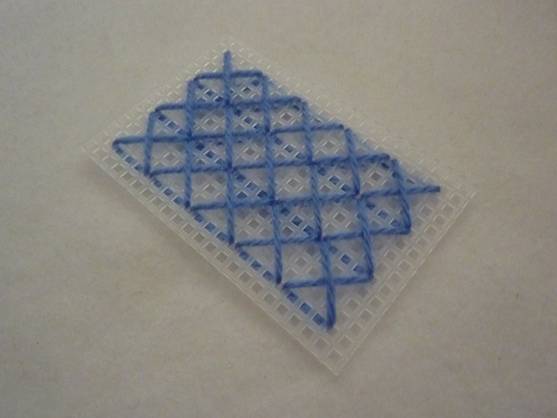 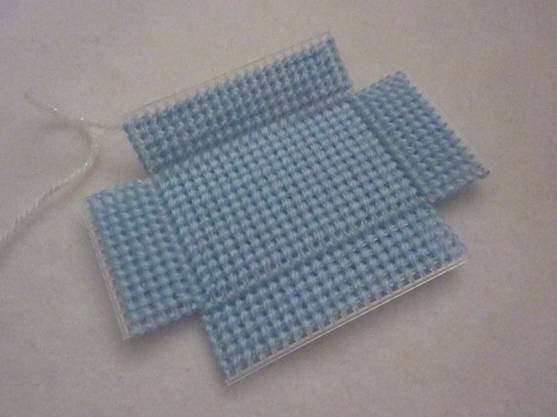 The inside of the lid 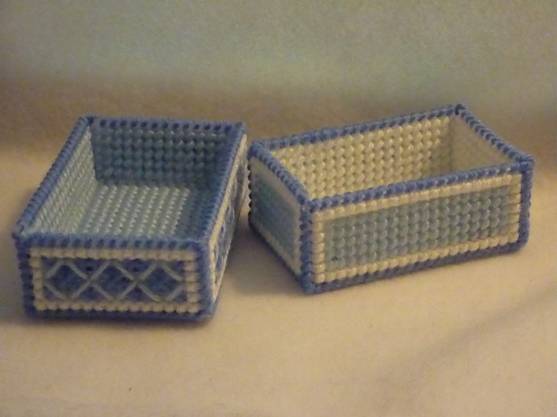 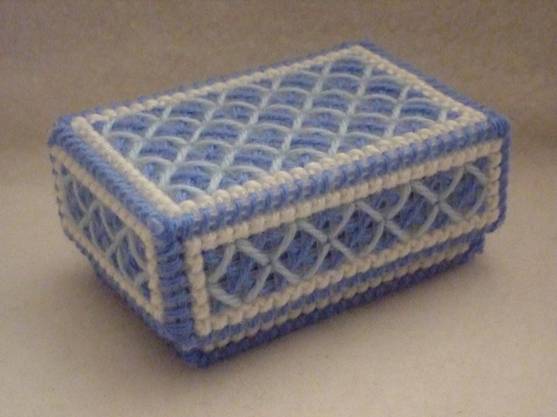 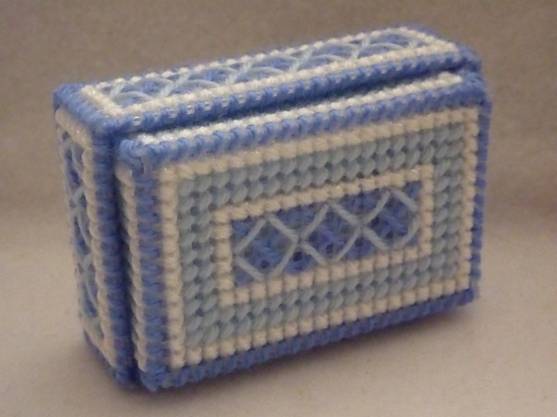 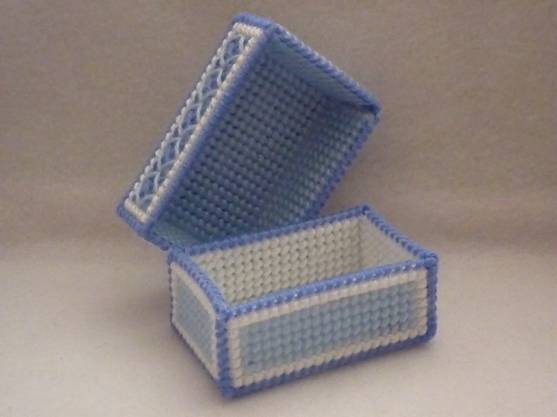 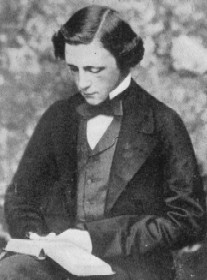